Who are the veritable agents of the conflicts in Africa?

It would be hazardous to reduce the conflict in Mali, after that in Libya, to a simple question of safeguarding the remaining pieces of the French colonial empire (“French Africa”, the maneuvering fields of the “secret agents” from Foccart to Mitterrand). It inserts itself in a long chain of conflicts about strategic stakes: from Somalia to Sudan, from Ethiopia to Eritrea, from Rwanda to Congo-Kinshasa, from Chad to Libya.

Surrounded by an impressive number of states Mali is an essential link in the stability of the borders in Africa that were recently traced by French colonialism: Algeria, Niger, Senegal, Burkina-Faso, Mauritania, Ivory Coast and Guinea. By its geographical position Mali has become a mandatory passage-way for all kinds of trafficking (cocaine is currently transiting through Guinea-Bissau and Mali) and for arms that wander through the Maghreb-Sahel region (Libya, Mauritania, Algeria, Niger, etc.) as well.

The latest flare up of the islamist guerrilla, first in Niger related to uranium mines exploited by France and China, subsequently in the Algerian Sahara around gas pits, show that the geopolitical stakes largely surpass the former French power that has been declining for a dozen of years.

“French Africa” is in tatters. The United States have extended their zone of influence over certain strategic countries like Angola in order to better control the oil supply routes. The British group BP has developed its positions in Algeria at the expense of France. But the major problem lies in the tendency towards the reduction of the market shares of all these countries compared to China. The recent “good will” of the latter in supporting the French intervention in Mali, rebounding in Niger where it has economic interests, is purely circumstantial and should not hide the new geopolitical givens. 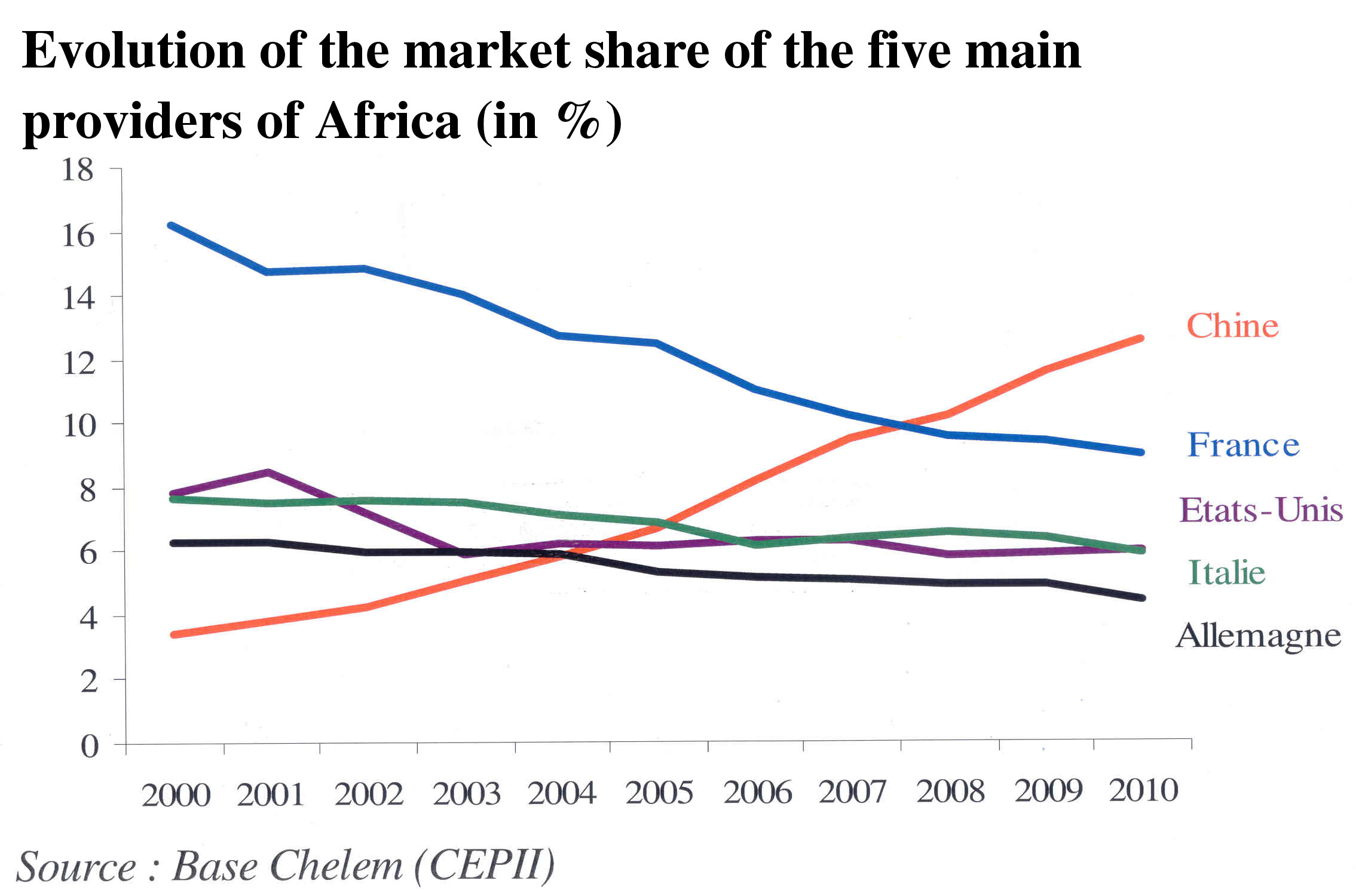 Source of the graphic in this article: http://lekiosque.finances.gouv.fr

China has meticulously extended its web over virtually the whole of the African continent, including Algeria, for more than ten years. It envisages controlling Africa not only for its oil, but for the rare metals as well that are necessary for the development of its electronic and military industries.

According to recent data the trade between China and Africa has grown from 129.6 billion US dollars in 2010 to 200 billion US dollars in 2012. With the elimination of Gadaffi by France, Great-Britain and the USA, China has lost an important battle for the control of its energy supplies, even if it preserves all its positions in Sudan (including both North and South, despite this country’s split in 2011), which it defends with all of its forces, by arms as well.

Russia, its present “ally”, also seems to operate a swift “turn-about”, faced with the rising geo-strategic power of China at its borders. According to the French foreign minister, Laurent Fabius, Russia would have “proposed to provide transport facilities” for the French troops and logistics in Mali. Would this be the small change for preserving its military base in Syria at Tartus, after the inevitable fall of Assad II?

It is evident that the French intervention in Mali and the warming up of its relations with Algeria have nothing to do with any “war” about raw materials between John Bull and Uncle Sam, on one side, and Europe on the other, of which France would try to take the geo-political lead. All countries of Europe and the USA, in spite of their apparent differences, have everything to win in the long run by eliminating China from the African continent, by cutting off its supplies before it puts its grand plans for navy development in place (which is at present limited to one aircraft carrier in the Chinese Sea since 2011).

French imperialism, which is one of the five lazzaroni in the UN Security Council, will have to comply with the decisions that the USA very well wants it to submit to. The American Defense secretary of state Leon Panetta underlined a week ago that the operations in Mali would not constitute a French war but demand “an international effort” that would have to be confirmed by the United Nations. In other words: by all ‘lazzaroni’, including Germany and Brazil (since they have associated themselves).

The question of islamist terrorism that trains its “international brigades” in the perspective of erecting a new caliphate in Africa – Africanistan- could seem secondary if behind this would not appear an imperialist repartition of west and central Africa to the profit of Algeria and to extra-regional minor powers (Saudi Arabia, Qatar, the Emirates of the Arab-Persian Gulf), who lean here and there on a “Tuareg national liberation movement” coming out of nowhere.

The very grave situation of economical and political decomposition of all these African countries that yesterday were attached to “French Africa” can only nourish the imperialist appetites of multiple actors. In this sense, the elimination of Gadaffi has permitted to proliferate immense stocks of weapons to these “islamist” guerillas, who are more or less manipulated by the secret services of the aforementioned islamic states. The war in Mali and the terrorist offensive by the AQIM (Al Qaida in the Islamic Maghreb) in Algeria are not independent one from another. Their emergence should not be the tree that hides the forest of a a geo-strategic turn in Africa.

Africa has become a terrain of explosive imperialist confrontations in view of a strategic control of raw materials. These are essentially tripolar: The USA and Anglo-saxon countries (Australia, GB and Canada); Europe (principally Germany, Italy and France); and China. The USA are here and now looking to deploy their whole military force against China by disengaging from Afghanistan in order to concentrate themselves on the Pacific and Indian Ocean zones before attacking the “African question.”

China has never hidden its intention to control Africa in the course of the past 20 years, not just economically but also strategically, as soon as it will have the naval means. Its whole imperialist ideology – expounded ad nauseam in its ‘learning books’ – leans much on the “model” of the emperor Yong Le who had hundreds of boats constructed in the 15th Century (at the origin of a first ecological catastrophe since half of the forest area of southern China disappeared!) and ordered grand “exploratory” expeditions throughout the whole of the Indian Ocean and towards the east of Africa in particular. As the USA aim at preserving their hegemony over the world (they dispose of 50% of the sophisticated weaponry) the Empire of the Middle has to expect a US counter offensive on all continents, first in Asia and very rapidly in Africa.

As to the France of Hollande and other European countries (GB, as long as it stays within Europe, Germany and Italy) the question that haunts all these brigands is not “respect for human rights” and the construction of “civil states”. Their obsession is to know what part of the market will be conceded to them in this African shadow theater in which the main parts fall upon the USA and China.

The war in Mali does not limit itself to the west of Africa: the door is already widely open for other conflicts in central Africa (Rwanda, Uganda, Congo) where the great imperialist powers implicate themselves militarily (for example: the British in Rwanda, which has become English-speaking).

The scramble for Africa (the partition of Africa by the great powers finalized at the Berlin Conference in 1884/85) is only being perpetuated.

Once more the populations of Africa, trapped between several cross fires by armed brigands with or without uniforms, are the bleeding and terrorized victims of these imperialist appetites, whether the latters’ ideologies are “the construction of civil states”, the “national liberation struggles”, or a jihadism whose “Holy Quran” is a user’s guide to the Kalashnikov.

Once more the workers of the industrialized countries will have to pay the high price for these wars that are inscribed in a course towards ever more sophisticated armament and in which Africa serves as a field of experimentation in the long term.

Mali and Algeria
Who are the veritable agents of the conflicts in Africa?

Analyses of other left communist groups:

French intervention in Mali: another war in the name of peace (January 19th, 2013)

War in Mali: In Africa, France is the Gendarme of Europe against the USA and its acolytes. (January 20th, 2013)