Presentation of the selected works of G. Munis - Volume 1

This 1st volume of the selected works of G. Munis collects articles, texts and pamphlets from his trotskyist period until his official separation from the Fourth International in 1948. Certain texts have been written immediately after this rupture. Some of them already existed in French, other ones, that are of great political and historical importance, have been specially translated for this volume and are published in this language for the first time. They are presented in chronological order, which allows to bet­ter understand the evolution of the revolutionary ideas of the author. This is further facilitated by the focus of this volume on the following principal subjects: the Spanish revolution, internationalism, revolutionary defeatism, the nature of the USSR, the degenerated workers’ state, state capital­ism... 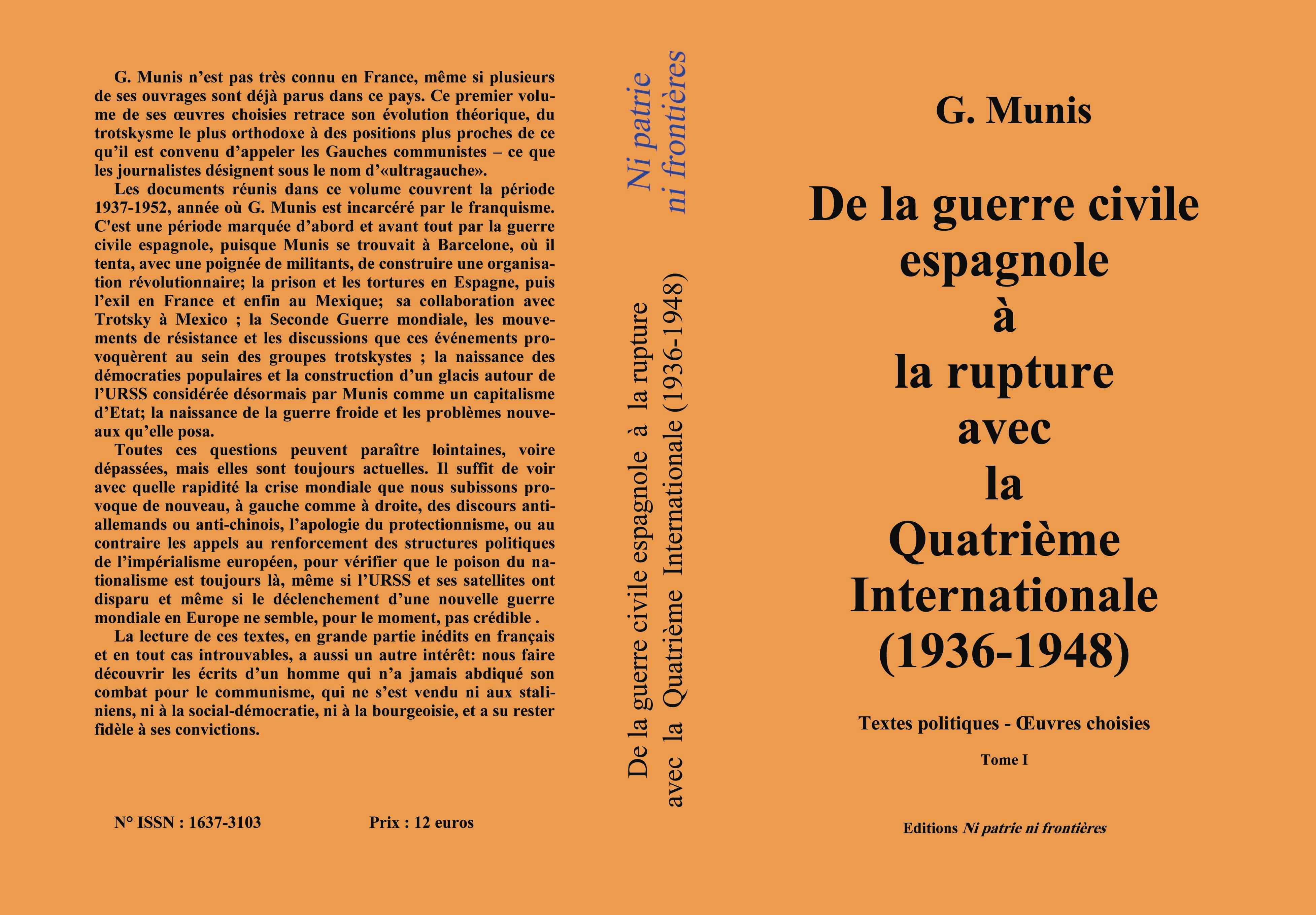 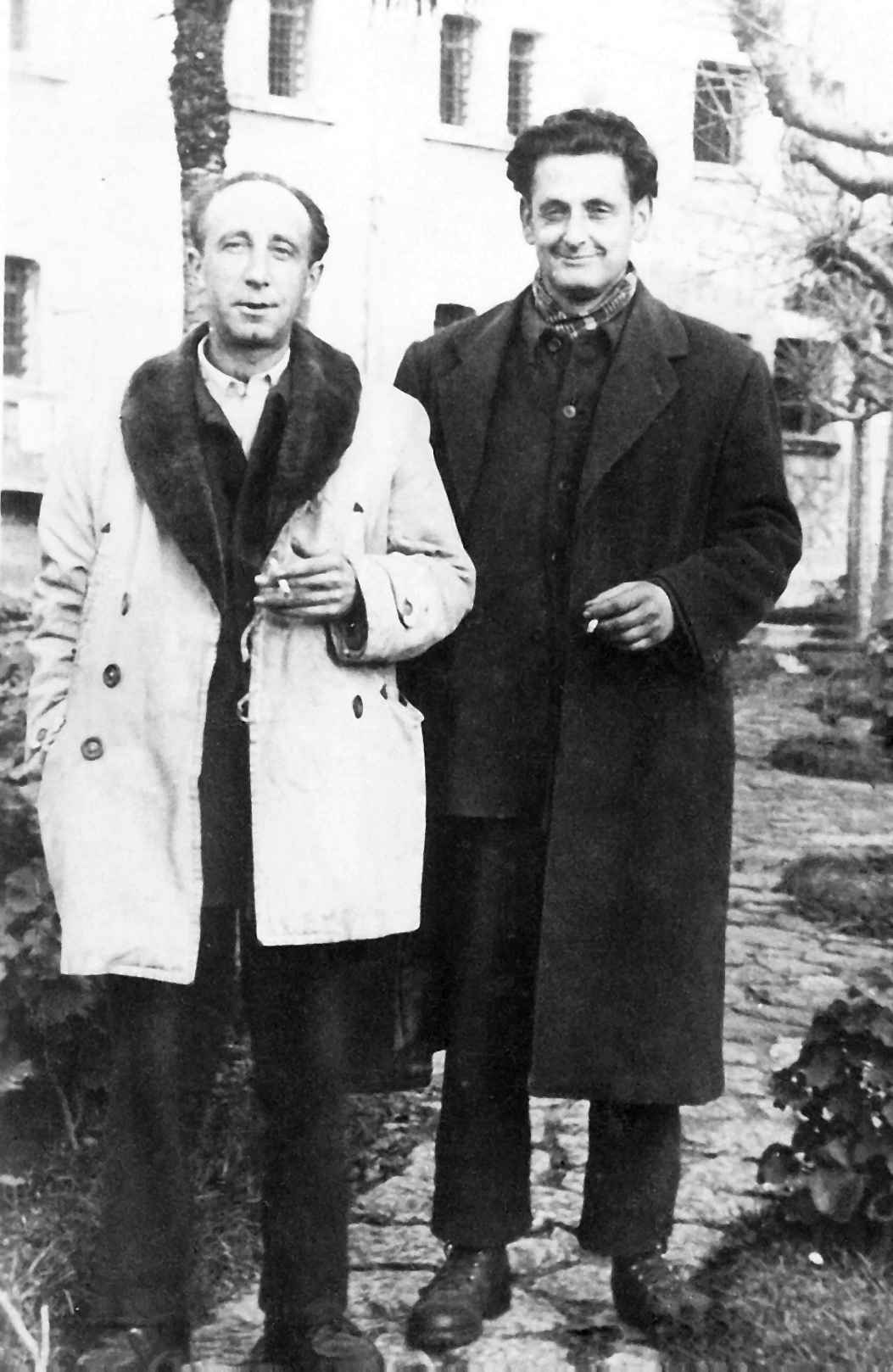 In 1954, G.Munis (at the right) and his companion, Jaime Fernandez, are in detention at the “El Duesno” Penitentiary in Cantabria (Spain).

As is indicated in the presentation of the political ideas of G.Munis at the beginning of this work [1], apart from the exhaustive study of the first great proletarian revolution in history, in Russia, the revolutionary movement in Spain in the 1930s has likewise had a decisive influence on Munis. After having experienced in his own flesh what Stalinism was capable of to impede the victory of the proletarian revolution in Spain, from 1936 to 1937, it is clear that his vision had to be very critical, even regarding the trotskyist ideas he had adopted, on the ‘defense of the USSR’, on Stalinism, and on the nature of the so called Soviet system itself.

Some leaflets have been reproduced on the period of the Spanish civil war, as have some letters and art­icles that were written in the course of the events. Articles from a later date will appear in Volume II. We recommend reading Munis’ master work on this subject as well – Lessons from a defeat, promise of victory . [2].

Next, and in chronological order, appears a pamphlet of 1944 of capital importance (and for the first time in French): The SWP and the imperialist War . It constitutes a kind of bridge between the defense of the positions of the Fourth International and the inevitable and necessary rupture from it from a revolutionary point of view, from the standpoint of a Marxist analysis of historical evolution. Munis plainly employs the method of historical materialism in order to understand the international evolution of capitalism and to analyze the proletarian movement at world level, at the risk of having to get rid of dead ideas, regardless where they come from. This defense, against the current, pushes him to review certain of his positions. Munis notices that the American trotskyist party - the Socialist Workers’ Party (SWP) - betrays revolutionary defeatism, and thereby internationalism, in the course of the Second World War, to the profit of a different ob­jective that is far from revolutionary: that of the transformation of the imperialist war into ... a veritable war against Hitler. The SWP turns its back on Karl Liebknecht’s slogan: “The principal enemy is within our own country”.

In a consequent fashion ﻿Munis criticizes the defense of the guerrilla (in Yugoslavia and in France) and of the French Resistance against the German occupying forces by the American party and the French trotskyist movement. Munis denounces the ’maquis’, the FFI, as a coali­tion of capitalist, anti-proletarian forces (bourgeois, Stalinist and reformist). Their principal objective is to avoid the veritable class struggle and by consequence, in view of the situation, to impede the immediate arming of the proletariat, that is solely capable of putting an end to imperialist war and capitalism.

In a magisterial way, the author defines the real content of ‘revolutionary defeatism’ as well; he treats the problem of the ‘defense of the USSR’ at a time in which he still thinks that it is a ’degenerated workers’ state’ (albeit this conviction will not last long). Munis reproaches the SWP of singularly being concerned with the military defense of the USSR, and of almost entirely abandoning the struggle against the Stalinist bureaucracy. Moreover he thinks that after 1940 ‘the defense of the USSR’ has to depend primarily from the struggle on life or death against the Stalinist power. He even arrives at saying that the ‘defense of the USSR’ has to be put into question, because its entire policies is counter-revolutionary. And he defends this idea before even considering the USSR (with inverted comma’s put around every initial because, as Munis said, neither of them corresponds to reality) as a state capitalism at the spearhead of the world wide capitalist counter revolution.

Subsequently, in 1946, he writes a pamphlet - The revolutionaries faced with Russia and world wide Stalinism - in which he defines, for the first time, Russia as state capitalist (as he would designate it from then on), as a product of the non-achievement of the communist revolution in Russia and worldwide, which has turned into one of the deadliest counter-revolutionary degenerations in his­tory. His pages on the relations of production and the surplus value from the so called ‘soviet’ lands was to become part of the best revolutionary communist prose on this question. They occupy an important place in this first volume and constitute a point of no return that, together with the question of internationalism, marks a categorical rupture with Trotskyism in the hands of Cannon, Frank, Lambert, Pablo and company. The texts that follow (most of them published in French for the first time) testify of a whole of activity, reflections and efforts undertaken to convince the militants, groups, and sections of the Fourth International that it is in danger ... in mortal danger for the revolution.

Munis signed the text entitled Explanation and appeal to the militants, groups and sections of the Fourth International together with other militants of the Internationalist-Communist Group of Spain. It synthesizes all this work of reflection.

His activities were far from limiting themselves to theory, as Munis goes to Spain in 1951 in order to educate revolutionary militants and develop a revolutionary organization, henceforth on new bases and outside of the Fourth International from which he had separated. After the so called tramway strike at Barcelona, where he has distributed a leaflet together with his comrades, praising the workers’ spontaneity and combativity, he is held in custody at Madrid. Apart from the leaflets, Franco’s police had seized several copies of the pamphlet ‘Four lies and two truths. The Russian policies in Spain’ . This text, dating from 1949, is also reproduced in this volume. It plainly analyzes with an astonishing force and a tried courage what Stalinism represents. In particular it warns the Spanish proletariat against the policies of the ‘communist’ Party of Santiago Carrillo and ‘la Pasionaria’, by replying point for point to one of their manifests. For Munis, as in 1936-1937, the Spanish Stalinist party will do anything that lies within its powers to impede the development of a real revolutionary, communist, movement in Spain and worldwide. In order to struggle against Franco-ism one has to struggle against the Spanish ‘communist’ Party, because it’s the latter in the first place that, by eradicating the social revolution, has allowed the victory of Franco. In order to struggle against Franco-ism and Stalinism, one has to struggle against capitalism. Only by struggling against the latter one can finish off with the former two.

Finally, this first volume contains a letter by Natalia Sedova Trotsky of 1951 to the Executive Committee of the Fourth International. In this letter she breaks with the international trotskyist organization, defending essentially the same positions as Munis on the nature of the Russian system and its satellites. Her letter, the reply by the Fourth International, the final political declaration written by Natalia Sedova to the journal France-Soir and an introduction to these texts were published just after the decease of Trotsky’s companion under the title ‘Today as yesterday’. By his defense of Natalia Sedova Trotsky, Munis strengthened his critique of Trotskyism that “approaches Moscow to the same extent in which Natalia moves away from it...”.

(Edited on the basis of the preface by the Editorial Board of the works of G. Munis - Barcelona)

Presentation by the editor

G. Munis is not very well known in France, even if several of his works have already appeared in this country. This first volume of his selected works retraces his theoretical evolution, from the most orthodox Trotskyism to positions that are more close to what is agreed to call the communist Lefts, to what the journalists designate with the name of the ‘ultra-left’.

The collected documents in this volume cover the period of 1937 – 1952, the year in which Munis is incarcerated by the Franco regime. This period is marked above all by the Spanish civil war, during which Munis was in Barcelona, where he tempted to construct a revolutionary organization together with a handful of militants; by prison and torture in Spain, subsequently the exile in France and finally in Mexico; by his collaboration with Trotsky in Mexico; the Second World War, the resistance movements and the discussions that these events provoked within the trotskyist groups; by the birth of the popular democracies and the construction of a bank around the USSR henceforth considered by Munis as a state capitalism; by the birth of the cold war and the new problems that it posed.

All these questions can appear as distant, even as outdated, but they are still of actuality. It suffices to see the swiftness with which the global crisis that we undergo again provokes, at the left as well as at the right, anti-German or anti-Chinese discourses, the apology of protectionism or, on the contrary, the appeals for the strengthening of the political structures of European imperialism, in order to verify that the poison of nationalism still exists, even as the USSR and its satellites have long disappeared, and even if the unleashing of a new world war in Europe does not sound credible at present.

The reading of these texts, which are in large part for the first time available in French and that are in any case unfindable, serves yet another interest: to make us discover the writings of a man who has never abdicated from his struggle for communism, who has neither sold himself to Stalinism, nor to Social-Democracy, nor to the bourgeoisie, and who has known to remain faithful to his convictions.

An English subtitled version of the documentary is available

The documentary can be watched on line for 5 €.

The DVD of the documentary can be purchased at 11 € per copy + postage costs.

More texts in English on Munis on this site.